To make certain Ron Wyatt made no mistake in this, YHWH directed His angels to visually appear to Ron and verbally direct him. Taking the Tables of Stone the angel said, “YHWH wants everyone to see these… sometime after The Sunday Law is enforced.” Those are the exact words of the angel to Ron.

Ellen White (Year 1901) explicitly described the message of the discovery of the Ark of the Covenant, 80 years before Ron Wyatt discovered it, “And He [Messiah] gave unto Moses, when He had made an end of communing with him upon Mount Sinai, two tables of testimony, tables of stone, written with the finger of YHWH.” (Exodus 31:18.) Nothing written on those tables could be blotted out. The precious record of the law was placed in the ark of the testament and is still there, safely hidden from the human family. But in YHWH’s appointed time He will bring forth these tables of stone to be a testimony to all the world against the disregard of His commandments and against the idolatrous worship of a counterfeit Sabbath.” Manuscript 122, “The Law”, November 23, 1901. {8MR 100.3}

Just like any message from YHWH, just like the Bible itself, the message of this discovery is both simple and profound. The true message of the Ark of the Covenant can be stated as simply as “a testimony to all the world against the disregard of His commandments and against the idolatrous worship of a counterfeit Sabbath”, or in other words, “We must still keep the Ten Commandments today, and the fourth, the Sabbath, is still Friday sundown until Saturday sundown, but NOT Sunday.” All the deeper studies on the Ark, like those at ArkFiles.net and the videos on this website still all conclude in this one message – That we must keep the Ten Commandments as they are written on the Tables of Stone and NOT keep Sunday as the governments of the world will try to dictate under the Sunday Law.

So did Ron Wyatt preach this message as THE true message of the Ark of the Covenant – or did YHWH choose the wrong man?

Ron Wyatt Archeology -The Ark Of The Covenant

The dry blood of the Risen MESSIAH, Yahushua has been found on the Mercy Seat of the Ark of the Covenant. It is in a cave below a crucifixion site near the Garden Tomb. This is true and will hit the mass media in the near future.

Ron Wyatt has made many discoveries pertaining to he Bible. All things will be revealed in their time. Yahuwah takes no pleasure in what He must do to those who do not believe in Him. All of mankind was created by Yahuwah, as sure as these Scriptures are true. So will the Ark of the Covenant be revealed in it’s time. None will be without excuse, when He comes back for His people

Transcript of the Interview: http://www.covenantkeepers.co.uk/last…
Audio recording of Ron Wyatt just before his death from cancer in August of 1999 regarding his claim/experience in the Ark of the Covenant and the Chamber it was in. Ron says that he was told by an angel in the Chamber that the information would be made known to the world after the Sunday Law was passed. Ron says that he changed it to The Mark of The Beast.

At 17 minutes Ron talks about what he was told about the 2 tables of stone, the 10 Commandments. He was told that when the Sunday Law is passed is when this information would be released.
This is the most important information on this planet

Ron Wyatt returned to the cave 3 more times, and since his first visit, to his absolute surprise, the cave had been completely tidied up. Four angels stood before him and he was told that the time is not yet for the world to see this discovery with their own eyes, but the time is coming when the inhabitants of the world will have a universal, religious Sunday law enforced upon them. This law will force man to break YHWH’s law, by penalty of disenfranchisement – being unable to buy or sell, (Rev. 13:17). Ron Wyatt was told that some time after this law has been passed, YHWH will allow the tables of stone (The 10 Commandments) and a good clear video of the Ark of the Covenant to be put on public display. For more information on the proposed law download a small booklet here. “It is time for thee, YHWH, to work: for they have made void thy law.” Psalm 119:126.

This is the very same law that Ron Wyatt referred to in the last interview he ever gave. The full interview is available here. The interviewer asks Ron, “…you took the tables of stone out, and then the angel told you something about the tables of stone?” And Ron Wyatt answers, “Yeah, he told me that it had to do with when these were to be shown to the world… when the mark of the beast law was in force, that shortly after that, was when this would take place… it wasn’t stated as the mark of the beast law, it was stated, “when the Sunday law…”. The interviewer wanting to make absolutely sure that the angel himself said the words “Sunday Law” then confirms with Ron, “But the angel said “Sunday law”?” And Ron Wyatt confirms, “That’s right.”

http://www.youtube.com/watch?v=g1CfZWCacy8  Crucifixion of Yahushua and the mercy seat

The Tables of Stone were Confirmed as PART of the New Covenant.

So what does all this mean? What message does this discovery have for the Christian world? What does it mean that Christ sprinkled His blood and water above the Ten Commandments?

A brief look into some of the stories and testimonies that Ron Wyatt shared with us, to see if they match up to the Bible and the Spirit of Prophecy. Ron claimed to have met four angels in the cave with the Ark of the Covenant, and claimed to have even met Messiah Himself whilst digging!

http://www.youtube.com/watch?v=HU2XJN7mWIg  The Ark of the Covenant Has Been Found

“Copyright Disclaimer Under Section 107 of the Copyright Act 1976, allowance is made for “fair use” for purposes such as criticism, comment, news reporting, teaching, scholarship, and research. Fair use is a use permitted by copyright statute that
might otherwise be infringing. Non-profit, educational or personal use tips the balance in favor of fair use.”

THE SUNDAY LAWS  and the  RETURNING INQUISITION   By Yedidah

The Noahide Laws: The Imposter 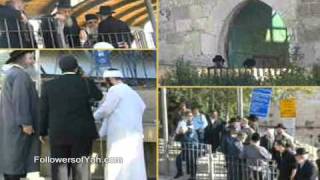 This is the most anticipated film of our entire service in the FOY Ministry. Taken from the popular book titled, ‘The Imposter’ written by L. McGuire, (c) 2008 FOY Publications has blessed thousands. Therefore, the FOY Ministry felt that a DVD was a must to produce. After much hard works and long months, we are blessed to present you ‘The Imposter DVD’, written by L. McGuire.

WARNING: This film is not sugar coated to please all who watch. Some may find this film offensive, nevertheless the truth must be told!

IT’S ALL PART OF THE PLAN: THE NOAHIDE LAWS

Additional Information regarding the Art of the Covenant:

The Great Secret of Solomon’s Temple  – By Michael Rood

Prepare for a Rood Awakening! as Michael Rood takes you on a whirlwind adventure in this fast paced video presentation, “The Great Secret of Solomon’s Temple and the Hiding of the Ark of the Covenant.” 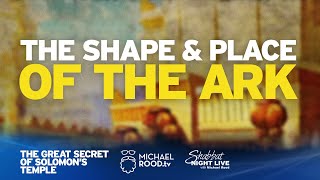 NO8 Click the Image on the left for Video

The Hebrew Scriptures detail the building of a great temple under the direction of King Solomon of Israel, the wisest man on earth. The Temple was built as a place to house the Ark of the Covenant. To make provision for the Ark’s safe keeping, Solomon constructed a sand-hydraulic elevator in the Most Holy Place. The emergency escape route and the stone sarcophagus in which the Ark was hidden during Nebuchadnezar’s siege were recently discovered in the elaborate tunnel system that honeycombs Mount Moriah – the Temple Mount in Jerusalem. 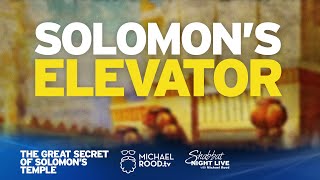 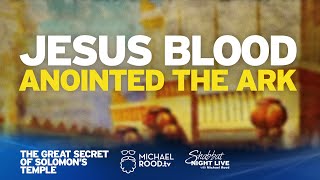 This is Michael’s “signature work”, the teaching that details the hiding of the Ark of the Covenant, and the Ark’s importance in the fulfillment of the Feast of Passover – a shadow of good things to come. This is the abbreviated introduction to Michael’s 13-hour video teaching extravaganza: “The Prophecies in the Spring and Fall Feasts of the LORD” – the 26 episode Bible Prophecy 101 and 201 series.

More Evidence Of The Enoch-Priestly Calendar