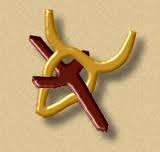 Rev 1:8   I am the ‘Aleph’ and the ‘Tau’, the Beginning and the Covenant without End, says  יהושע  (Yahushua Ha Mashiach) “who is, and who was, and who is to come, the Almighty.

Rev 1:8 “I am the ‘Aleph’ and the ‘Taw’, Beginning and End,” says יהוה “who is and who was and who is to come, the Almighty.”  ( This is the traditional Greek translation using the concept of the first and the last as Beginning and End )

Explanation:  The “Ox Head” is the pictograph for the ancient letter “Aleph; the first letter of the Hebrew language.  The “Crossing of the two sticks”  is the pictograph for the ancient Hebrew letter “Tau” that is the last letter in the Hebrew language.  However, it is not the end, signifying the initiation of a covenant “without end.”  These two words placed together called Aleph-Tau, constitute a sacred Paleo Hebrew word that cannot be translated into any earthly language other than the ancient Hebrew text; i.e.:  Gen 29:35; Psalm 34:1; 117:1;  2 Chron 31:2; Jer 33:11; Zeph 3:20; others.  Written in its original form: ֵאת.

Pictured of the logo above is the first and last letter of the Hebrew Alphabet known as the “Alef & Taw.” These two letters represent eternity or (the beginning without end). They were created from the beginning by YaHuWaH at Creation. In the original Hebrew Scriptures, we can actually see these letters in the text but the English translators left them out:

Satan hi-jacked these symbols later on and used them for pagan sun-god worship, but long before that, YaHuWaH used them in the Hebrew Alphabet to illustrate a prophetic picture of our Messiah as the sacrificial animal (the red heifer) being nailed to a Taw (“Crossing of the two sticks”, two olive trees of Ezekiel 37:16-19. Our Messiah died on the tree for the“two houses of Yisrael,” which are Ephrayim & Yahuwdah /Judah )!

There are several places in the book of Revelation where Yahuwshuwa revealed that he is את [Alef & Taw] and this title is called “the Alpha & Omega” in Greek (the first and last letter of the Greek Alphabet). But in Hebrew, this same title is called “the Alef & Taw” (Revelation 1:8, 1:11, 21:6, 22:13). What does this mean? It means “eternal life.” If we have the mark of “the first and the last in Hebrew ” that means that we have eternal life and we will live forever with him!

The mark that Yah places on the foreheads of those who “sigh and cry” in Ezekiel 9 is as follows:

Sha’ul (Paul) the Apostle also speaks about the “marks” that he bore in his body for Messiah:

Galatiym (Galatians) 6:14-17 “….But  Elohiym (God) forbid that I should glory, save in the Crossing of the two sticks of our Master Yahuwshuwa Messiah, by whom the world is crucified unto me, and I unto the world…..From henceforth let no man trouble me: I bear in my body the marks of the Master Yahuwshuwa.”

YaHuWaH’s Sabbaths and Feast Days are shown to be a “sign” or a “mark” of ownership to those who belong to him. In Revelation 19:12 it says that those who “have the testimony of Yahuwshuwa” are they who “keep the commandments” and these also have the right to “eat from the tree of life” (Revelation 12:17, 22:14).

The name of our Abba Father YAHUWAH (top line) is made up of three forms of the Hebrew verb “to be”. From right to left (bottom line): Hayah “He was”, Hoveh “He is”, Yihyeh “He will be”.

Click below link  For the Original Texts with  the Ancient Hebrew