Exploring The Authority Of Yahushua Messiah’s Biblical Calendar, In His High Priesthood Order Of Melchizedek (And Its Implications For Identifying The Appointed Times In 2014) by Rob@inthatday.net

This paper presents a synopsis of principles from my research and study over many years concerning the identification of the true biblical calendar and which I trust will help others in their studies and understanding of this subject and subsequently to identify the annual biblical calendar in the emunah firm belief of Yahushua Messiah’s demonstration.

The major statement of this paper is that, given the full biblical and historical evidence now available to us it is Yahushua Messiah   ALONE who only has the biblical authority over the biblical worship calendar today, through His post-resurrection office as High Priest of the Melchizdek order.   No-one else has any biblical authority to set or proclaim the biblical calendar of YHVH, regardless of what religious orthodoxies they are. His behavioural example is thus highly significant.

The implications of understanding exactly who carries the true Divine authority over the biblical calendar today (as outlined by Moses in Leviticus 23) are both radical and profound to any who are sincerely concerned and called to prepare for the redemption and return of YHVH’s trustworthy remnant elect in the last days.

To access /download the pdf   article,   login to http://www.inthatday.net/ . The pdf article can be accessed from the blog page.

Take care in the firm belief of Yahushua Messiah

Please click here for the details in PDF  : YahushuaMelchizedekCalendar

Below is the conversation responded  from Rob @ inthatday.net:

1. This is the difficulty – that the biblical Sabbath does not line up neatly with the Gregorian (Roman) Saturday – we find that HillelII changed the Rabbinic calendar in the early 300 CE it is not recorded what he did because his changes were kept secret and no one else worked with him on this task – but that he changed the calendar is acknowledged by Judaism and He did fix it  to make the Judaism calendar work in the roman exile – but I am now seeing is that he single handily must have been the one to change the Sabbath in the Rabbinic calendar to re-align with the Roman Saturday to

2) because of it assisting rabbinic Jewish to participate in the economy of the roman empire.

We find that YHVH declared to Moses that he would “hide his face” from Israel when it would be in the exile – by this I understand he would hide His festivals and calendar because Israel had corrupted them.  Moses and the prophets confirmed this because they foretold that when these matters are brought to the last generation of redeemed Israel – the causes of the Baruch/ ble_sings and the curse (and to keep the Torah Sabbath and true appointed times is truly a Berakah /ble_sings – but when we cannot see them because we are in exile; it is a curse), then the remnant would mourn for YHVH to bring us home to be able to keep his festivals – and Zephaniah prophesied that it is those who mourn for YHVH’s worship times that YHVH will bring back to His covenant land in the last days

(see Zeph 3: 18  I will gather them that are sorrowful for the solemn assembly, who are of thee, to whom the reproach of it was a burden.)

So when we find the Sabbath does not fit our ‘Egypt” calendar of the Saturday then we have a difficulty because we have to work on His days – so we will cry out for YHVH to send His Redeemer to set us free from Egypt and bring us home once again – it becomes a heart cry of true repentance for those who are truly seeking His face and His prophetic word and the end of His judgements of Redeemed Israel.  SO I am convinced that He (YHVH) has hidden his calendar and is now revealing this so that we can see that we are in “the pig sty” – in Egypt/ in Babylon and only He can break us out of that Bozrah prison house and bring us home – so the revealing of the biblical Sabbath not fitting the Gregorian week as we have been told by religion for nearly 2000 years is in fact proving YHVH’s prophetic declarations to the last generation.  HalleluYah!

2. . According to my astronomical simulation software (Starry Night Pro) The equinox occurred in 30CE at 12.48 am (Jerusalem time) on 23rd March (Julian calendar not Gregorian) marking Day 1 Month 1. Note from the astronomic simulation that the moon was 0.12 days old and that would mean the Rabbis would have marked their Day 1 month 1 beginning on the evening of the 24th – this gives one day difference between the 14 day  count to Passover from the equinox calendar as opposed to the 14 day count to Passover from the conjunctive moon calendar (Rabbinic). 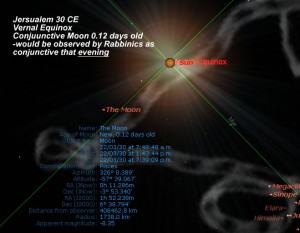 3. What is confusing you I think is thinking the Gregorian calendar is stable and how the days work out, when the Roman calendar was at that time a Julian formula  and not the Gregorian formula that we have today – so there is a change in  the Roman days that would have been on the Roman calendar in those days. However if you discard the Roman calendar which is an added confusion and do a simple count of days to day 14 you will find that Yahushua’s crucifixion fell on the 4th day of the week given a 14 day count from the conjunctive moon day declaration as the counting of days on the equinox calendar works out the same to Passover/unleavened bread every year if one is working from the equinox, as per my diagram in the last article.

4.  Your second question is that the website you refer to is using the equilux as marking day 1 of month 1 and not the equinox. The equilux is something quite different and is not accurately measurable because it is dependant on the latitude position. They use this because of their interpretation of Enoch – but as I discussed in my article this is inaccurate because Enoch was a pre-flood calendar and the equator at the time of pre-flood was in proximity of the covenant land whereas to day it is moved because the earth has been moved some 23 degrees on its axis. You need to understand the physics of the difference between the equinox and the equilux.

The website you refer to simply reads that in Enoch he said the equal day equal night was occurring at beginning of the year when the sun completed its circuit (the equinox).  The astronomical reality is that the only place where the equinox and the equilux coincide is when one is at the equator – this is not the case for the covenant land today proving that the earth has been tilted on its axis because of the flood because at Jerusalem today the equilux occurs some 4 days earlier than the equinox. I have discussed this in my last article.  However the people who simply interpret the Enoch calendar in that way will not acknowledge that the Enoch calendar is a preflood calendar where the earth was not in the same orbit (they argue that there is only 364 days (when in creation reality there is 365.25 days) in the year today – by theological arguing that the Day of Atonement is not a day to be included in the calendar – it is nonsensical – but they have to do something theological like that because the tilt of the earth was not in the same position pre-flood as it is today and the earth’s orbit around the sun takes 365.25 days today (as opposed to 364 days pre-flood).

5. I do not keep the Enoch calendar that has been promoted in the Internet , but Yahushua’s calendar based which we can understand from the gospels account, based on the precepts of Enoch and the Zadok’s, but recognising the astronomical changes that have occurred.

Some advocate the equilux (the estimated day of equal day and equal night hours) as it occurs in Jerusalem as constituting Day 1 of the biblical calendar.

“Equilux Or Equinox? How Creation’s Testimony Debunks The Jerusalem Equilux As The Beginning Of The Biblical Year.” This article explores why they make such an assertion and how a calendar anchored on the equilux does not concur with the Apostolic testimonial record of the historical timing of the events surrounding Yahushua Messiah’s crucifixion, whereas a biblical calendar based on the equinox   as Day 1 of the biblical calendar,   specifically and uniquely does so. If interested, the article may be downloaded from clicking here: EquiluxOrEquinox

Tikvah that this helps

P.S.  More research on the YHWH’s appointed calendar can be found here: http://man-child.com/?cat=52