Before we address Enoch’s prophecy of the seven epochs of 490 years each that span from Creation to Messiah, first some words about why the book of Enoch is important for today.

The timing of the renewed interest of the book of Enoch with the discovery of the Dead Sea Scrolls in 1947 is significant. It anticipates the repeat of the sin of the Watchers.

Footnote: The “Watchers” is a general designation for a certain class of high ranking angels. They “watch” over men and the cosmos to make sure that order is maintained, and then report back to YAH, the Almighty. However, some 20 of these rebelled, along with another 180 under their authority, “200 hundred in all” (Enoch 6:6). The final total who rebel is one million, as deduced from the hierarchy of Enoch 69:3 with 6:8, i.e., 20*10*50*100.

What was the sin of the Watchers?

“In the days of Jarod” (Enoch’s father), these angels mixed their DNA with men, animals, and plants. This resulted in giant men and monstrous creatures. This was the main reason why The Almighty sent the flood of Noah. A new creation was needed,  a reset, because, except for Noah, all men had corrupted their way upon the earth.

This sort of mixture of men and animals is happening again today and is being weaponized. YAH’s warning from the book Enoch applies to today because the sin is the same today, and so are the consequences. Indeed, the very first verse of Enoch claims to be a message for our day, i.e., “for those living in the day of tribulation,” (Enoch 1:1.)

However, there is another reason why the book of Enoch is important for these last days. And that reason is found in the verse immediately following the place where Jude quotes from in the New Testament.

“Enoch, the seventh from Adam, prophesied about them: “See, the Lord is coming with thousands upon thousands of his holy ones to judge everyone, and to convict all of them of all the ungodly acts they have committed in their ungodliness, and of all the defiant words ungodly sinners have spoken against him.” (Jude 1:14-15)

Let us continue to read from the Book of Enoch, from the very next verse, (which is addressed to the fallen angels)…

In other words, the book of Enoch is saying that the orderliness of YAH’s creation testifies to their disorder (“transgression”). They are without excuse.

An orderly creation testifies to the following:

And in keeping with the theme of an orderly cosmos, the Book of Enoch prophesies that the Enochic calendar (“workings of the cosmos”) would be fully revealed at the end of the seventh cycle of “seventy weeks”. It seems that the seven-cycles of 490 years complete its course twice: at the First and Second Coming of the “Son of Man,” (Enoch 93:9-14; cf., Daniel 9).

“And after that in the seventh week (i.e., a “week” of generations of 70 years, see verse 3)… at its close shall the elect… receive sevenfold instruction concerning all His creation.” (Enoch 93:10-14).

The prophesied, “sevenfold light” was given to men when Yahushua came the first time, by His Apostles and prophets.

However, it seems logical that this prophecy of Enoch is also fulfilled a second time just before His Second Coming, not foundationally, but an expansion of what was revealed the first time. One thing held in reserve until these last days is the understanding of the workings of “the cosmic order”. And this is now revealed, both to secular men by way of science, but more importantly, to His servants by way of the revelation of Messiah as revealed by an orderly cosmos.

The heavens are a cosmic clock that keeps track of the passage of time using extremely complex cycles and rhythms.

However, these complex rhythms, like the many hands of a complex watch, have been, and still are, tracking every event recorded in the Bible and in world history. All events occur in an orderly fashion in conjunction with the sun, moon, and stars thereby demonstrating a non-random universe.

Biblical events tend to clump together along the scaffold of these rhythms like the skeleton of the body upon which the flesh hangs.  Or to use a secular analogy, these rhythms in time are like the invisible filaments affected by “dark matter” that gravitationally pull on the visible universe so that wherever this invisible dark matter is densest, the likelihood of the visible universe clumped around it is proportionally more likely.

The cycles and rhythms of  the Almighty YAH’s clock act like gravity; they inexorably pull all things towards His master plan — toward the written destinies of both men and angels, yet without impeding freewill.

This does not mean that future events are easily predictable, but rather that the probability when major events occur is predictable, and even what type of event.

By analogy, crucial events occur in history in proportion to how ‘dense’ the invisible filaments of the universe are. Or to use another analogy, they increase according to how loud the crescendo of overlapping chimes on YHWH’s cosmic clock is when they periodically chime all at once. It’s at these mountain-peak moments along YHWH’s timeline that new chapters in redemptive history ring out.

The pattern is obvious in hindsight but murky beforehand when as yet they are mere potentials, even if high in probability. Only YHWH the Almighty knows the end from the beginning because He is the Beginning and the End. 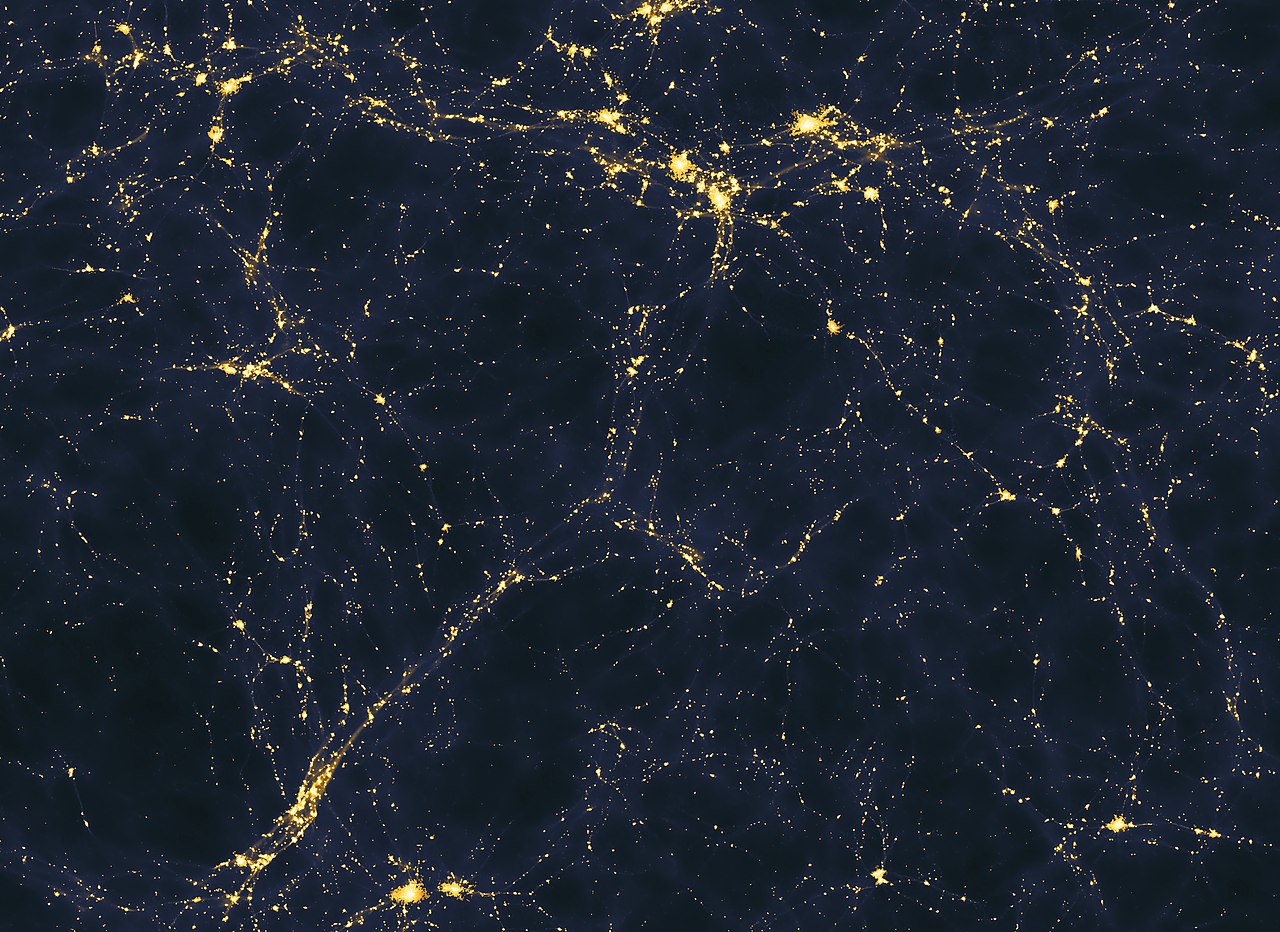 (Wiki) “In the standard model of the evolution of the universe, galactic filaments form along and follow web-like strings of dark matter. It is thought that this dark matter dictates the structure of the Universe on the grandest of scales. Dark matter gravitationally attracts baryonic matter, and it is this “normal” matter that astronomers see forming long, thin walls of super-galactic clusters.”

Chart for “Seventy generations of 70 years” of the Book of Enoch, the key to all other chronologies 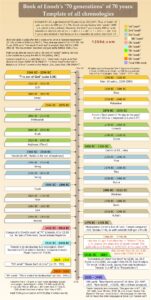 The chronologies of Luke and Matthew are simply variations of the Book of Enoch, (as is Genesis in the MT, LXX, SP with the “Key of 23“. This even includes the Tablets of Sumer!)

Apparently, Luke understood this extra “70-years” as a foreshadowing of the pre-incarnate Messiah Yahushua who came ’77 generations’ later.

(Note: Matthew overlaps the generation of the exile in order to ALSO allow a rounded 40 generations to Christ.)

Matthew and Luke trace their genealogies through the line of Judah, not Levi so that the Conquest of Canaan occurs three generations later. (See “Nahshon” in Wiki.).

Enoch’s Prophetic Outline: Pre-Creation to Messiah (70 gen.), and 30 more to the “Appearing of the New Heaven”

You can read the prophecy of Enoch at this link: Book of Enoch 91-93. Note the odd way that the last three cycles of 490 years appear out of order, that is, before the other seven cycles! This is a strong hint to the importance of the internal three-plus-seven and seven-plus-three pattern found throughout.

Enoch utilizes idealistic generations of 70 years, which he says is symbolic of just one day. Therefore one day equals 70 years. (Compare to Daniel 9.)

The parallels between the Book of Enoch and the Bible are self-explanatory.

The following is meant to be an aid to the chart.

From the Exodus to Now

Now let us view the above prophecy of seven weeks (of generations) again, except this time beginning from the Exodus rather than from Creation.

There have elapsed seventy weeks of seventy years from Moses unto our generation. That is, from the 40 years between the Exodus to when Israel entered the Promised Land (1446-1406 BC), plus 7*7*70 more years to our generation equals AD 1985 to 2025.

Observe that if one begins from the Exodus (a type of ‘new creation’ instead of the literal Creation), then a general parallel between the events listed in Enoch’s prophecy, except now from the Exodus to our day, reemerges.

How long is a generation?

A generation can be 40, 70, or 100 years in the Bible. However, in the Book of Enoch, it is logically 70 years. The number seven predominates the book, as it does also in the Book of Jubilees (and Book of Revelation). Furthermore, we have Daniel 9 that concurs.

Locked out special endnote, “The sign of blindness and sevenfold light”. I have excluded this note because not everything is meant for the general public. 1260

by Follower Of YAH
Keep Reading