Please click here for easy reading: PDF – July 8, 2014 Catching up of the Man Child – Taken from beginning of Part 3

Concerning the Catching Up of the Man Child [Rev 12:5]:

(Excerpt from Part 3 of the Book of the Man Child of Revelation 12:5)

To reiterate from Page 9 of Part 2, the Man Child, synonymous with the Bride; the Overcomers, 144,000, the Two Witnesses, Manifested Sons, and other terms, etc., is both for the Messiah and of the Messiah Yahushua and YAHUWAH [John 10:30].

In the most fundamental of terms, the Man Child is essentially a reward of the Father, given by the Father, and given to Himself as Yahushua.  He is giving to Himself His own Bride; chosen from among man, His own creation, whose spirits that are comprised of YAHUWAH’S Ruach ha Qodesh (See Chapter 2 of Part 2, Page 35), and who love Him unconditionally such that the priority of YAHUWAH and Yahushua only . . . are clearly demonstrated in the conduct of these person’s respective lives by the decisions and choices that they each have made pursuant to their corresponding lessons that they have endured; revealing the clarity and purity of the spiritual DNA of their respective spirits being readily attested, discernable, and approved to Aloahiym’s satisfaction; these people’s souls (that directly affect their spiritual health and condition of their spirits) having been cleansed of the darkness of evil (rebellion & idolatry) [1 Sam 15:23] during their related time on the earth [2 Cor  3:18].  In short, YAHUWAH’S heart’s desires have replaced the respective believer’s soulish desires.  Such is the purpose of man’s life on the earth [Deut 6:4-6; Mark 12:29-39; John 4:14; 7:38; 2 Thes 2:16-17; Psalm 51: 5-10; 119: 1-3; others].

Thus, one who makes the right “choices” receives the just and righteous reward of YAHUWAH Aloahiym for having made those corresponding decisions according to His dictates, rules, regulations, and desires, when done so out of devoted, but unselfish, unmitigated, and unquestionable love of the Father, Son, and Set Apart Spirit; not only out of obedience, but also out of the same unconditional love for Aloahiym that He has for those that belong to Him [Deut 6:4-5; Mark 12: 29-31; John 14:28; 15:9; 17:26; 1 John 4:19; others].   These selected people would have seen, heard, and perceived Aloahiym out of His eyes instead of their own (of the flesh), having allowed Aloahiym to manifest through them according to His Will pursuant to the progress of the surrender (alignment) process [See Job 14:4; 15: 14-16; Psalm 51:17; John 14:10].   To repeat, such is the purpose of man’s life on the earth. However, most men and women do not accomplish this purpose.  Notwithstanding this, Aloahiym is pure Light, (“perfect” in the true sense of the word by man’s understanding and much more), and will not choose an “imperfect” Bride that is to be “joined” with Him, hence to become “one” with Him, and that He is both willing and committed to call His own [Eph 1:4; 5:27; 2 Cor 11:2; Col 1:22; Jude 1:24; Isa 62:3; Rev 21:9; 22:17; others]. 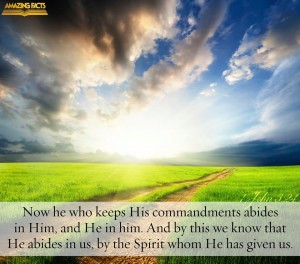 The soulish connection (DELUSION) of man’s emotions with his or her own spirit is replaced with the Truth of the Light of YAHUWAH, anThed the Truth shall set one free [John 8:32].  Hence, the priorities and desires of the flesh are replaced with the priorities AND dhesires of YAHUWAH.Rev 22:17And the Ruach and the bride say, Come. And let him that hear say, Come. And let him that is athirst come. And whosoeverwill, let him take the water of life freely. Thus, there is absolutely nothing so important of man that can, or should, supersede and/or preempt the critical imperative of anyone called as a believer to prepare for the catching up of the Man Child; given that YAHUWAH Aloahiym demands perfection from the group of believers who qualify pursuant to the selection process [Matt 5:48].  As has been made clear in Parts 1 and 2, the selection process is open to all believers.  Those individuals, who are to be selected are chosen because they desired to be, and were willing to pay the price of their flesh during the course of their respective lives while on the earth in order to make it happen.  To be in the flesh is not the same as being of the flesh;this differencebeing a function of the identityfactor.  One either identifies with the flesh, a result of the soul (carnal nature) being attached to the flesh or one identifies with his or her spirit that is turn connected to the Ruach, where the soul is properly aligned with the respective individual’s spirit and the person’s spirit.   The total surrender on one’s soul is the completion of the alignment process where the soul is subservient to the person’s spirit, and the spirit of the individual is properly aligned and subservient (conformed) to the Ruach Ha Qodesh.   This was covered in Part 2 of this message.

Every believer has the same opportunity, but not all believers are willing to pay the price.   Thus, potential Man Child Company members are initially chosen from the general assembly of self –purporting believers, first; subsequently progressing into the Body of Messiah; then passing through successive filters of purification as the numbers of people dwindle or diminish who at some point in their respective lives, became unwilling to further pay the price (the total surrender of the flesh); once again, a result of the improper use of the carnal nature within them, and wherein YAHUWAH’S desires had not replaced the individual’s soulish desires.

This point is critical to the basic understanding and willingness of eating from the Tree of Hai, and separating oneself from the Tree of the Knowledge of Good and Evil.  To reiterate once again from Part 2, the carnal nature is the operative tool of the soul (in man’s composite being consisting of spirit, soul, and body) that serves to provide and empower man with his or her freedom of choice.   The soul’s wrong choices (resulting from the dominance of the soul over the respective person’s spirit) yield results that can be damaging if not fatal, including spiritual death apart from physical death.

The Man Child is anything but a passive subject, encompassing a wild array of soulish emotions, intellect, and comprehension.  The catching up of the Man Child is an event that is imminent, inevitable, and certain; is NOT contingent and/or probable, and is NOT of soulish origin and occurrence [Hab 2:3].  This is NOT what some people have termed the “rapture” or mass catching up identified in 1 Thes 4:17.  The catching up of the Man Child [Rev 12:5]is a completely different and separate event occurring prior to 1 Thes 4:17.  Bible prophecy will be fulfilled, and will not be changed for any man or woman.   This generation of the earth’s population will witness the event.  To witness the event without being a part of the catching up [Rev 12:5]istragic and invites judgment and the risk of death at the second resurrection [Rev 20:6]. As was noted in each of Parts 1 and 2 hereof, this is my first and so far only book, and is directly pursuant to the what the Ruach ha Qodesh has revealed to my wife and I, and is reported to readers pursuant to the direction and understanding that we have received from YAHUWAH Aloahiym [See 2 Pet 1:19-21; Amos 3:7-8; Dan 9:22-27; Matt 10: 26-27; Rev 1:1-3].   The validity and revelation of Scripture does not rest on man, but with Yahushua ha Mashiach Who is the Word [John 1:1, 14] and one with YAHUWAH [John 10:30].   Thus, there is no other higher authority who stands as our witness [1 Cor 4:4; Rom 14:12; John 5:32; 1 Thes 2:4; 1 Pet 3:12]as to what is articulated in this message and broadcast throughout the world, and Who holds us directly accountable for all that we say and do as the authors [Ezek 3:10-11, 20-21; James 3:1; Matt 10:24; 23: 8-10].